Recording a 3 person podcast and video on iPhone

Rode released the RODECaster Pro in 2018 and it looks like pretty much the solution to the work around i ended up with below. It allows for 4 channel inputs and being a RODE product makes it more neatly compatible with their microphones.

There are particular challenges to filming video and recording audio outdoors such as:

There is nothing that puts people off a video faster than crappy audio. I would go so far as to say you can put up with video that is not brilliant so long as the audio is easy to listen to.

Season 1 of the Beach Business Breakfast Show we filmed on the balcony of the Merewether Surf Club.

Since we are on the east coast of Australia we get the full bright morning sunrise when we are filming the podcast and we have the noise of the waves on the beach and the coffee shop below the balcony.

The other complication for our setup is that we wanted to film and record the audio from 3 people.

Plus I wanted to film all the audio and video from the iPhone. The iPhone microphone is quite good but it is small and aims to pickup a wide range of sounds. In a quiet room without much echo is works fine but outdoors the resulting audio wouldn’t be great to listen to.

With some experiments and good gear we can get a decent quality recording.

The Rode Lav microphone has been one of the best investments I’ve made in audio gear for the iPhone.

They have a nice clear recorded sound and don’t pickup much background noise.

For iPhone there is a mic and extension cable combination which gives plenty of length so that we can be up to a few metres away from the phone with crisp audio.

I bought our pair of mic and extension on ebay: ebay.com.au/itm/RODE-SMARTLAV-WITH-SC1-BUNDLE-FOR-SMARTPHONE-iPHONE-/301536375684 for about $100AUD inc delivery in Australia. The mic by itself are typically about $65.

The SmartLav+ broadcast-grade wearable microphone designed for use in a wide range of film, television and broadcast scenarios, or wherever broadcast quality audio is required in a discreet, portable format without the complication and expense of additional wireless equipment.

With the smartLav+ the user simply mounts the microphone on the talent, connects it to a smartphone or tablet headset jack and records via the RØDE Rec app for iOS, or any other audio app of their choice.

To get two Rode lav mics recording at once I used the Rode SC6 dual input adapter. It does exactly what you would expect, connect two Rode lav mic’s to the one input on the iPhone. Purchased on ebay for $30AUD: ebay.com.au/itm/RODE-SC6-DUAL-TRRS-INPUT-AND-HEADPHONE-OUTPUT-FOR-SMARTPHONES-/301051120305

One of the episodes of the podcast we recorded with just the two lapel mics, one on Dave and one on Phil our guest. You can hear when I speak at about 15sec – 30sec in that the audio from Dave is quite clear but it sounds like I’m talking from across the room.

The challenge then remained of how could I record three lav mics at once. Trying to blend the audio from a separate mic recorded on my laptop with the iphone video was way too much work and didn’t turn out that great anyway.

The solution I stumbled on was to connect two of the Rode SC6 together. By inserting the output connector to the input of another SC6 that would make for a total of 3 mic inputs.

Checking with Rode before the purchase I wasn’t entirely sure it would work well. Matt who answered my customer support enquiry said:

In terms of the physical connections, yes this will be perfectly compatible.

Please bear in mind however that Lavaliers typically require a small amount of voltage for operation and that the input device (the iPhone) can only supply a finite amount of power via it’s 3.5mm jack. This therefore creates problem where the voltage is shared between more then 2 LAV’s which is of course what the SC6 has been tested to be compatible with.

In short, this should work however we cannot guarantee the microphones will operate to specification.

The end result is something that looks like this: 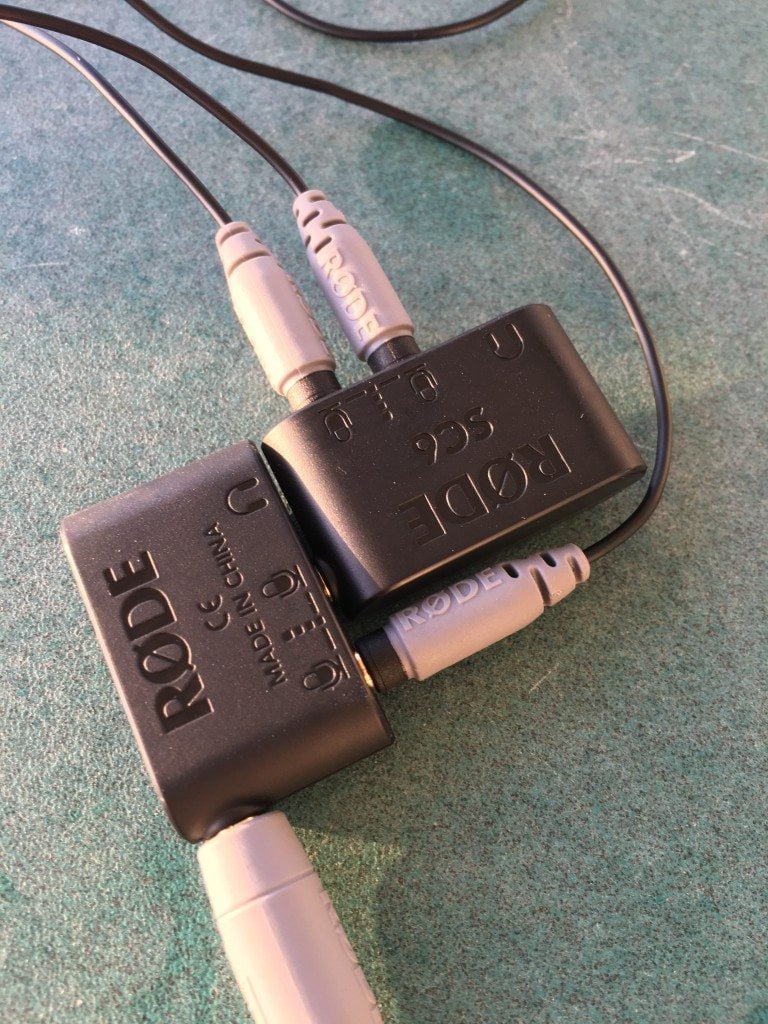 Which results in audio like this one that Dave and I recorded with Patrick:

The complete setup is configured such as:

How could we make the audio better

This isn’t a ‘perfect’ solution but it does work pretty well. One downside to having the three mics is that if the background noise gets loud (eg. someone on the beach yelling, or large waves breaking or intense external noises) then the person speaking to one of the mics may need to speak a bit louder to overcome it. To some extent we get this effect naturally because we want to hear each other.

I’d really like to have the option of using the Rode HS1 microphones, which are the headset style that loop over your ears and then the mic comes down near your mouth, but at about $400 each they are not really in our budget right now for the podcast. If Rode would like to sponsor us some new gear though we’d love to hear from them :).

The HS1 details are at en.rode.com/microphones/hs1, though I don’t know if it would be possible to use three at once.

The other possibility is using some kind of pre-amp or mixer that can be used to control the levels and separate channels of the audio. There are some mixers available but mostly seem focused on standard mic / guitar type inputs and two channels. The power available from the headphone jack and the lightning socket on the phone appear to be limiting factors on such devices too.

The quality of the video (and photos) out of the iPhone is really remarkable even under conditions where you would expect it not to look great.

The one problem the iPhone can’t fix for me is having bright sunlight that requires us wearing sunglasses a lot of the time and creates shadows on the western sides of our heads. I tried some options for lighting to reduce the severity of the shadows but in the end just gave up worrying about it.

Stable video recording requires a good tripod and mount for the iPhone.

After some hours of reading tripod reviews the best value quality tripod I could decide on was the VANGUARD ESPOD CX234AP Tripod with pan/tilt head. The cheaper tripods don’t raise the phone up high enough or can be flimsy. These can be bought for around $100AUD on ebay, eg. ebay.com.au/itm/VANGUARD-ESPOD-CX234AP-Tripod-with-pan-tilt-head-/121928559239

It’s a decent weight, the clips on the telescopic legs feel strong and the pan and tilt mechanism all feels smooth and easy to adjust, really happy with it.

You can pretty well use any tripod though so long as you have a suitable mount for the iPhone like this:

There are lots of sellers on ebay that have this kind of bracket, one example at the time of writing whom I bought this type of mount from can be found here: ebay.com.au/itm/171910273333

A note of care; when putting the tripod away or transporting it make sure it is not going to slide around in the car. I’ve busted a couple of them already when the tripod has fallen against the interior of the car.

The other type which I have also used and seems fine is this type of bracket and it is probably becoming my preferred one since the audio cable gets in the way of the other type:

There are other types of brackets but these seems fine. They screw onto the standard fitting that is on the top of a tripod. Plenty of them available to buy on ebay and for under $5 approximately, eg. ebay.com.au/itm/181441243505

I won’t go into much detail here about the lighting as I haven’t used it much outside. After the first few episodes we recorded there didn’t seem much benefit and it’s a whole extra box of stuff to carry around.

If you are filming indoors they are very useful for taking the shadows out from people’s faces and necks and I have used them plenty.

The cost for the setup (without lights) totals to about: $420AUD. Maybe round it up to $500AUD since the price and availability of the gear will vary and might have postage costs etc.

The lights you can expect to pay $500+ for a pair, more if you want batteries for them.

Plus you will need a current model iPhone of course. Given that the camera keeps improving with each new version of the iPhone it’d be safe to say that whatever is the latest one is probably going to be the best to get.

There are no doubt alternatives to the models and types of gear to do this kind of recording with and as with any tech the options available in the future will improve. It was only a few years ago that finding decent iPhone microphones was difficult but the range that Rode have is outstanding.